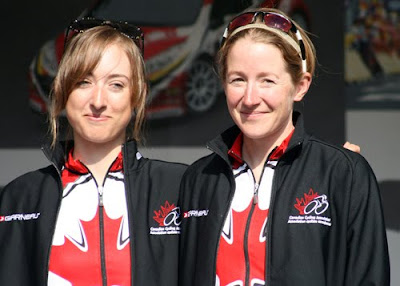 Amy and I at the team presentation 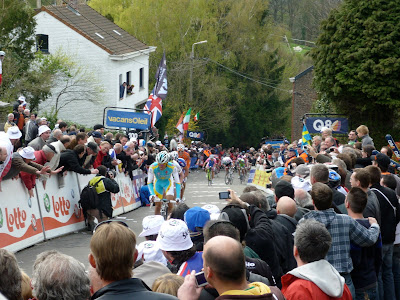 The men's finish about 150m from the line, right before
Cadel attacks Contador 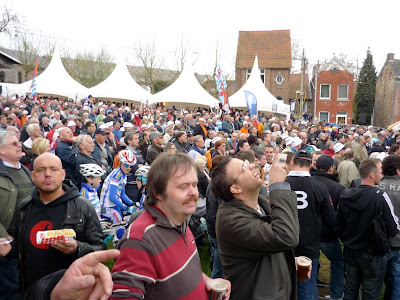 
(I'm a bit behind..update on the last race we did- Ronde Van Gelderland- Finished 20th in a group sprint.)

Wednesday was my second world cup experience ever in racing the Fleche Wallonne Feminine in Huy, Belgium. I was really nervous about racing on the hills after all of this flatness, but it turned out that they were not as bad as anticipated as most teams did not ride that aggressively off the start. I had so much fun on the downhills, even though they were a little sketchy at times with some people skidding their tires. The race really got going at the first time up the mur de huy at 80km, this was also where my race sort of went downhill. I think it was about where the max grade reaches 26% where I went to stand up and felt like my legs might fall off, not good! Unfortunately I lost contact with the group at this point and had to do some chasing for the last 30km in a group of ten including another teammate. I barely made it up the huy that second time, a 27 cassette would have been amazing. The gigantic crowds really helped get all the racers up that climb. It was crazy how many people were out watching the race! The way the race was set up, the men's and women's races alternated coming through that area, which made for bigger crowds than women's racing usually draws. One thing that sucked was that even though we finished the whole race, apparently my group didn’t make the time cut being around 10 minutes back at the most. But it doesn’t really matter, I still had fun and there are more races to come! It's really cool to see how many hard core bike fans there are in Belgium. I think at one point there was four people helping out with one girl's bike before the start. And my team mates have had people come up with printed photos for them to sign, or to give them a gift. I got a little biker as a gift! It's really different than what you experience at home. Anyways I'm off to bed, racing two more races this weekend, apparently mostly flat again, hopefully not too windy!