Fireworks announced my arrival into Pennsylvania on July 4th..

The Colavita riders and staff would meet up in Altoona, PA for the famous Tour de Toona, making a return to the NRC racing calendar after a several year absence.. 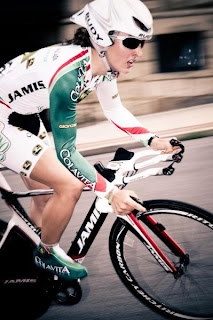 Stage 2. Road race, 73 miles, Mountain top finish.
Racing was hot, hot, hot. Luckily a downpour of rain came along to cool things off. The race was aggressive going through the rolling terrain. So aggressive in fact that it was pretty hard to find a lull in the pace to grab bottles from the car. I remember Lauren handing a bottle off to me at the same time she accelerated to follow an attack.. superstar team-mate. The whole Colavita team set a hard tempo leading into the final 5 mile climb of the day up Blue Knob mountain. I lost contact with the front when attacks started going, but Janel and Rushlee climbed with the leaders until just before the finish. Canadian champ Veronique Fortin once again proved that she is a super climber and won the stage. Janel was top Colavita finisher in 11th.
Stage 3: Road race, 144 km (actually 155 km…)
The day’s stage included 3 significant climbs. We would climb up the other side of Blue Knob than in the previous stage, this side featuring a 2 km gravel section.. Our goal for the day was to move Janel up in GC. Unfortunately we were down two teammates as Kristin and Kelly went home sick. An early break went in the race with Lauren representing Colavita. Their gap grew to around 4 minutes, then suddenly it started jumping up.. 5, 6, 7, 8 minutes? But weren’t we going the same speed or faster? It all made sense when suddenly the motos were signaling for us to turn around.. wrong way! They decided to neutralize the break and the chase, and then restart both groups at the old time gap when we got back on course.
Off we went again. But wait, we were directed the wrong way again! Once again we were neutralized and had to restart the race. A very strange race indeed.
Luckily this was the last time we were neutralized and the racing continued in earnest. I couldn’t stick with the top climbers going up blue knob and rode the rest of the race with a smaller group and tried to make it back to the leaders. But this was the uninteresting part of the race, I only found out the exciting parts after reaching the finish. Lauren had taken the win and Janel finished third! Turns out Lauren and Anne Samplonius (Now) had made it over the climb with a gap and stayed away the whole race! Janel had also escaped the pack with Veronique Fortin on the second climb and outsprinted her to the line. A wicked day for Colavita/Forno d’Asolo on the hardest stage! 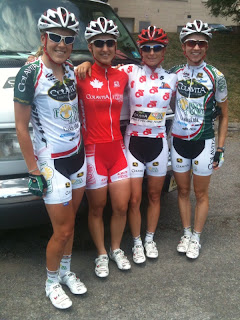 Stage 4: Criterium
Finally a flat-ish stage! The 8-cornered crit had a slight hill and then a very twisty section leading into the finish.  Janel was sitting in second, 1:15 back on GC after the previous days stage. Goal #1 was to move up in GC, goal #2 was the stage win. The whole team rode impressively from the start, controlling the whole race. Gaps started to open in the field as the pace increased and groups of riders were being dropped, including the yellow jersey. The team rode the front and drove the pace, steadily increasing the gap by 10 seconds a lap. I had an unfortunate incident with the pavement around this time …nothing too serious though, just a nice patch of road rash to deal with and one destroyed pair of shorts:(. I was back in the action by the next lap. The gap grew to the point where we lapped the yellow jersey, Janel just had to finish the race to win the overall! I was third wheel coming out of the final corner, finishing second in a close sprint with Laura Van Gilder (Now and Novartis).

Thanks to the hard work of the riders and support staff, the Tour de Toona was an amazing race for  Colavita. Janel won the overall GC, we won team GC by over 7 minutes and had 3 podium finishes with all 4 riders in the top 15 in GC!
Final GC:
1st Janel
8th Rushlee
13th Lauren
15th Leah
Next up is the Cascade Classic in Bend, Oregon. Love the riding in Bend!