"When it rains it pours"


"When it rains, it pours.." At least that’s what a lot of people have been telling me lately. Between a broken collarbone, disappointment with olympic selections and the passing of my Grandma, I think it is a fairly accurate statement.

It all began at Nature Valley a few weeks ago, my hopes of a stage win quickly came to a end at the Uptown crit. Another rider rode me into the barriers with 4 laps to go. My bars hooked the barriers, which led to a spectacular crash where my bike was thrown over the speeding peloton and landed quite far away. I had hardly any road rash to show for it, but ended up with a very sore shoulder. The medic assured me that nothing was broken and I did not need x-rays. Extremely relieved, I went on my merry way.

Despite being quite sore, I still raced the next day’s Menomonie stage. I resented every single pothole and climb, but survived the 122 km stage and finished with the front group. Decided that sprinting was not a good idea since I could only really ride the tops.

The next day was the infamous Stillwater criterium, featuring laps of a brutal 22 % climb. My shoulder and back just felt worse. I couldn’t do my own hair and could hardly ride the trainer to warm up. Not knowing how I would possibly be any help to defend the team's yellow jersey, I broke down before the race and called it, better to rest for nationals. I cheered on my team as they successfully defended the yellow jersey for Carmen and took team GC! Spirits were high as the Optum men's team also won yellow and team GC!

I became more seriously concerned about my injuries after travelling all the way to Lac Megantic, QC for nationals. Twelve hours later of waiting in emergency, I found out that my collarbone was indeed broken. I contemplated the advantages of private healthcare during this wait time.

It was also around this time that I was surprised and disappointed with being named the Olympic alternate (decision was made pre-injury). I am happy for my Canadian teammates who made the team, but I really thought that  my racing performance this year could merit me a spot. It is disappointing when proven performance and evidence of being a good teammate are not enough in a discretionary selection.

All of this other stuff became insignificant when I learned of the death of my Grandma back home in Winnipeg. She has been such an influential figure in my life that I would call her my idol.

I admired and adored every single thing about her. Something I admired most was how she could be so strong in the face of adversity. After winning her first battle with breast cancer, she joined the Chemo savvy dragon boat team and would defiantly dye her hair hot pink every year! Even during this second battle with a new form of cancer, she remained resilient and optimistic. Never once did she complain and just continued to put the needs of others first. Nothing could stop her from living life to the fullest! 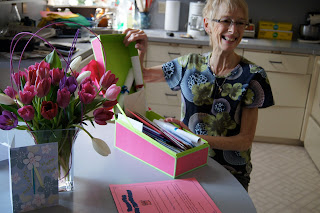 I am sad that my Grandma is gone and will miss her, but I am so grateful to have had such a wonderful role model in my life. She taught me to be strong, optimistic, kind, grateful, resilient, to follow my passions, stand up for my beliefs, and to find joy in the smallest things in life.

I can use her lessons now to be optimistic in dealing with these small setbacks. Yes I am frustrated and disappointed with a few things at the moment, but I am still young and have lots of other opportunities to look forward to. It is important to keep things in perspective in both sport and life. Small set backs can give you the motivation needed to achieve great things in the future!
Leah