Hot off the press!

I am excited to announce that I'll be back racing with Colavita again next year! It is an amazing team, filled with awesome people, and supported by incredible sponsors! 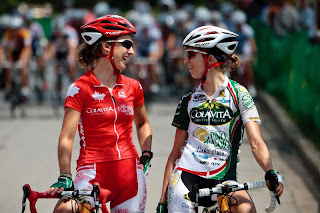 Edison, NJ (September 13, 2011) -- Janel Holcomb, the top-ranked women's cyclist in the US, has signed with Team Colavita for a second season. Leah Kirchmann, #2 in the women's individual NRC standings, will also be returning for 2012. Directeur Sportif Rachel Heal made the announcement.

"We are thrilled that NRC winner Janel Holcomb will be racing in Colavita colors in 2012" said Heal. "This year, Janel proved she has the speed, strength, and smarts to win stage races throughout the US. We look forward to continued success next year."

Kirchmann, the reigning Canadian National Criterium Champion, sprinted to four individual victories and clinched the overall win at the Tour of Elk Grove. DS Heal said she is very excited that Kirchmann will be returning to the team for a second season noting, "This young Canadian has amazing versatility." She continued, "Leah has proven that she can win stages from both breakaways and bunch sprints."

Team Colavita raced to a near-perfect season in 2011, with more than 40 victories in one-day and stage races. For the second consecutive year, Team Colavita finished #1 in USA Cycling's ranking of women's cycling teams. Additional signings for the 2012 season will be announced in the next few weeks.