Well I am officially the last Canadian standing after this stage. Joanie crashed when a rider decided to take a very bad line going through a corner and completely cut her off. She ended up with a broken collarbone, which really sucks, I hope she makes a quick recovery! Leah G. and Julia ended up in a group behind and were time cut. Today’s stage consisted of 2 laps of 45 km and then a smaller finishing lap for a total of 124 km. It was ridiculously windy so we were sure it would break up in the crosswind. Starting at the very back of the pack yesterday really sucked, so we all lined up super early. It did help a bit though with positioning, but I was still too far back when we hit the crosswind and the group got completely strung out and gaps started to open. It really sucks to see the group strung out for km’s ahead of you and then start to see the gaps opening way ahead. Ughh if only I could easily stay at the front! I didn’t race very smart and rather than slowly work with some others to bring back the group, I decided to bridge the gaps myself. It worked, but I got pretty tired doing that over and over again. A group of 11 went off the front when the pack was all strung out. The yellow jersey and most of the big teams were up there so not very many teams were interested in chasing down the break. This didn’t really make it any easier, there was still a lot of time spent in the gutter in this race! The finish was kinda crazy. The road nearing the finish had a small ledge that dropped into gravel, enough that it made it hard to get back onto the road. At one point I had someone yelling from behind to move, but really with a drop to the right and someone’s derailleur to the left, where am I supposed to go?! Apparently this isn’t a very good excuse because I got a nice punch in the gut as the rider went past, how lovely! Oh well, at least I finished with the pack and didn’t crash today. I'm now sitting 21st in GC, 4th U23. It will be a bit lonely going to sign in on stage alone tomorrow. Only one more stage to go!
Here’s a photo from stage one, evidence I made it to the front!
From www.womenscycling.net 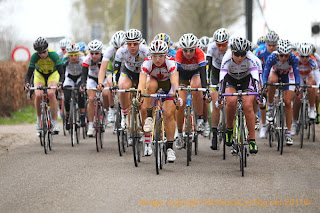