Dwingeloo, Dwingeloo, Dwingeloo! It's just fun to say! As you can probably tell we raced in a town called Dwingeloo today in the Drenste 8, a UCI 1.1 event.
I went into the race pretty positive. The roads were actually wide, there was barely any wind and the cobbles had a smooth strip down the middle to ride. All very good things when bike racing in Holland!

The race 141 km and I don't think I can describe what kind of loops we did. It seemed like we were always returning to the same town and then heading off in a different direction. I did the same race last year, but only recognized parts of the course. I relied on the piece of tape on my stem marking out the distances for cobbles and intermediate sprints. The races are so long that you usually don't get to see the whole course before a race, making the tape and a speedometer very useful things to have. Most of the intermediate sprints were only 2 km after the cobbles so it got pretty strung out through that section of the course.

Even though the roads were wider, I had a difficult time moving up today. I was caught up behind quite a few crashes and the corners were very slow with lots of people. Usually the best place to move up is on the sides of the road, but you need to be really vigilant when doing this! There are all sorts of obstacles you risk running into such as parked trucks and cars, garbage cans, concrete blocks, random poles... you need to always be looking ahead.
The race came down to a big bunch sprint won by Marianne Vos. I rolled in with the same group in 48th/165 starters. I was hoping for a better result, but oh well, there is still lots of racing to come. And I wasn't dropped like last year so that's a positive!
Here's a link showing some of the race:
http://www.youtube.com/watch?v=7oYcFMsJkBI&feature=share

Next up is the World cup on Saturday. There is a hill in this race! And the Winnipegers reading will appreciate this... it's an old garbage dump! Pretty sure it's the biggest/only hill in Holland. 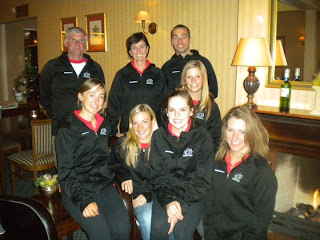 Photo credit- Karlee
The team and staff.. looks like it could be Christmas